The somatosensory cortex – located on each side of the brain (the front part of the parietal area in the midline of the brain, running from the top of the head to each ear) – receives sensory input from the opposite side of the body.

“Memory is dispersed, forming in the regions of the brain responsible for language, vision, hearing, emotion and other functions”, wrote Anthony J. Greene (a professor of psychology, operating a learning and memory lab at the University of Wisconsin), in the July – August 2010 issue of Scientific American Mind.

While working at committing something to memory, the more areas we are able to recruit in support of learning and retention, the more probably we will remember, as Greene explains: “It means that learning and memory arise from changes in neurons as they connect to and communicate with other neurons… When a memory forms in the brain, it alters the connections between nerve cells… New synapses form when repetition reinforces an association, creating a memory as neurons that fire together wire together.” 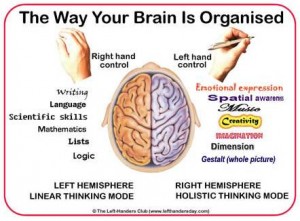 “The Woman Who Changed Her Brain” – Barbara Arrowsmith – Young

The Science of Everyday Thinking course – The University of Queensland