In humans, the ventral and orbital cortices develop faster than the dorsal prefrontal cortex during the early and later postnatal period. Therefore, the emotional brain (limbic) matures well before the cognitive brain (thinking). Prefrontal development ends in the mid-twenties, and the brain comes into mature balance of all the circuits sometime in the mid-thirties, at least for the luckiest of us. 🙂

For the ones with underfunctioning parts of the lower, or ventral, half of the prefrontal cortex there is hope as empathy can still be thought in a few different ways, firstly by contrasting it with sympathy. While empathy means having the ability to put yourself in another’s shoes, emotionally experiencing what they might be experiencing, sympathy, on the other hand, is more of a recognition that someone is being in pain while you having the desire to do something to alleviate their pain.

Theory of mind is a key developmental accomplishment where the child learns they possess mental states (desires, intentions and beliefs) that might be different from those of others. Theory of mind is not normally shown in people with autism, borderline personality disorder and also some forms of bipolar disorder. People with narcissism, psychopathy and certain types of schizophrenia, on the contrary, display cognitive empathy but lack emotional empathy. The two types of loss of empathy might be associated with underfunctioning parts of lower, or ventral, half of the PFC.

„I realized that I often, do not directly connect emotionally to people, or understand the way my behaviour affects them. I see these things in a cold and distant way, and only upon seeing the effect can I then cognitively appreciate what I am doing. I then realize that my playful teasing of people could actually hurt them, and I was not stopping to read the signs on their faces that they were, indeed, hurt. I was also regularly putting people close to me in harm’s way, just for my own edification and for the good times I might experience. It’s not like I know exactly what empathy is, but I can now look at behaviour – the way people go out of the way for one another, the amount of crying they do – and I can see that I’m really different from most people. There have been many incidents that provided harbingers of an adult life characterized by a flattening of emotionality and borderline psychopathy.” („The Psychopath Inside” – James Fallon). 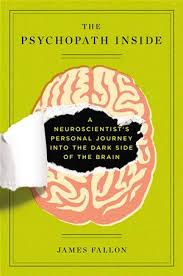 “The Psychopath Inside: A Neuroscientist’s Personal Journey into the Dark Side of the Brain.” – James Fallon

Exercise Physiology course – Understanding the Athlete Within – The University of Melbourne